In the years following the march, my father used to joke that I was responsible for the fall of the Iron Curtain.  To this day, the question remains unanswered in my mind: Did the Great Peace March contribute to the end of the nuclear arms race?  Within three years of the march, the Berlin Wall came down and communism collapsed across Europe.  People rose up and, with relatively little violence, forced communist governments to step aside and allow free nations to emerge.  The world that so many people had told us was impossible had come to pass.  There were many powerful forces at work to end the Cold War—millions of people at all levels of society, many of whom had endured tremendous suffering over a lifetime yet maintained faith, who schemed and planned and waited, and who recognized when the time had come for a change and at that moment had the courage to seize the opportunity.  To their credit, leaders on both sides responded to the inevitable and managed fragile transitions.  Had we played a role in turning that big wheel?  Perhaps the Great Peace March invigorated some grassroots along the way; perhaps we empowered some people to add their voices to the many who wanted to end the Cold War and forge a sane nuclear policy.  Or, maybe, as Ram Dass suggested, our quest was not so much about huge, historical change but about ourselves in the creation of a community.  Maybe it's that creation of community that will, in the end, put the last of our nuclear weapons to bed.
As for the peace marchers…

Bill continued to travel and write.  His Buddhist studies took him to Zen monasteries across the United States.  Twelve years after the end of the peace march, he published his first novel, winning the Hemingway Prize for New Authors.  Since then, he has written several novels and an important collection of Zen stories.  He is settled in the American Southwest where he and his wife, also an accomplished author, lead writing workshops.

I lost track of Tom for several years after the end of the march, but I recently tracked him down in North Carolina where he lives on a sheep and llama farm.  A mule, a goat and a hen house full of chickens reside there, too.  Tom is dedicated to his son and daughter, his stepson and stepdaughter, and his beautiful new wife.  When he isn’t shearing sheep, he has a career as a school counselor.

Iris Bean Blossom married Michael, the burly blacksmith from the Living History Farm in Des Moines.  They moved from Iowa to a community in the Pacific Northwest where Michael builds eco-friendly houses and Iris makes aprons and quilted pot holders for sale at the local farmers’ market.  They grow organic vegetables and flowers and have two very lovely daughters.  She still sees the world through rose colored glasses. 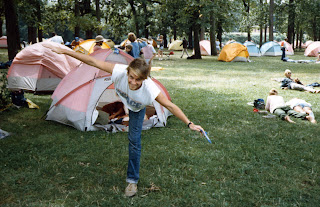 Evan returned to Salt Lake where he entered university to study art and architecture.  He now designs Olympic villages and other enormous venues.  He lives in Denver with his wonderful wife, also an architect and political activist, their daughter, a budding artist, their son, who plays a mean guitar, and their dogs, Scoobie and Baloo.
As for me, after the march, I returned to the classroom to teach civics and world studies for eighteen years.  I never tired of talking with young people about how our democratic government was founded, how it's organized, and the way a democratic society is supposed to work.  As a result, I have had the awesome opportunity to read the Declaration of Independence and the US Constitution dozens of times.  In recent years, I moved to the European continent where I now live with my ever-loving husband, our 100% vegan daughter, and our dog, Athena, goddess of wisdom - and war.  I teach in an international school and hope every day to start a new adventure.
ACKNOWLEDGEMENTS
I am deeply grateful to everyone who supported the Great Peace March.  Thousands upon thousands of people made donations large and small, stood along the road to greet us with smiles, applause and shouts of encouragement, and invited us into their homes for a meal, and shower, and a comfortable place to sleep.  If you are reading this, please know that you had an enormous impact on our success.  In addition to showering us with your generosity and hospitality, you proved by your numbers that nuclear disarmament had significant support among the American people.  You turned the tide.  You made it happen.
My fellow peace marchers know full well the debt of gratitude we owe one another for creating a bond that can never be broken.  Best of all, we have collectively forgiven one another that debt and live instead in the steady stream of energy that the peace march created.  We are a mighty flood and a celebration.
Heartfelt thanks to Roy Finch for recording my original songs at his studio in Connecticut; to Sienna Lyon for valuable social networking advice and Fredrik Sjoberg for expert technical support; to Jane Hurst, who kindly digitalized my songs, and to Jane (again), Judy White, John Windle, Jeanne McCrea, Stephen M. Randall, Sean Murphy, Pamela Wrigley, and Charley, Michael, and Rosemary Monagan who gave me valuable editing feedback and the encouragement to keep writing.
Special thanks to Jennifer Wood, my writing partner, for sharing her open heart and seeking mind.  I will long and fondly remember the many hours spent over manuscripts and ginger tea at the Literaturhaus in Berlin.  Reader, when you are done here, as, indeed, you nearly are, I recommend a visit to Jenn's wonderful memoir at: http://dachauisalsoatown.wordpress.com/.
My husband and daughter allowed me two precious gifts among many: time and solitude.  I could never have done my best work without you.  Thank you.  I love you, too.
Posted by Laura Monagan at 4:10 PM