For SMR, JMM, and SWM who made the peace march truly great.
My introduction to the Great Peace March came in late 1985 when a friend tossed a copy of the L.A. Weekly, the local free paper, on my desk at work and suggested I might be interested in the cover story.  Making my way home through rush hour traffic that evening, I began reading the article entitled “David Mixner’s Remarkable Dream” a few sentences at a time at each red light.
“The biggest problem we face in making (disarmament) happen,” Mixner began, “is the loss of belief and hope, especially among young people, that they can make a difference.  They seem to have come to accept as a historical inevitability that they will die in a nuclear war.”
By the time I’d reached the end of the second paragraph describing a peace march “in which 5,000 people will walk from L.A. to Washington, DC—a trek of 3,235 miles,” tears were streaming down my face.  I realized at once that I had to be one of those peace marchers across America.
What could explain my sudden conviction?  At twenty-eight, I was too young to have been a peacenik or hippie and too old to be an impressionable kid.  Like most people, I held to an ideal of world peace, but I didn’t believe in dismantling the whole military complex.  I didn’t think that ending warfare between human beings was possible.  I wasn’t idealistic about peace, but I was one of those young people who worried that dying in a nuclear blast was a growing probability.
The United States and the Soviet Union had built tens of thousands of costly nuclear weapons.  Our military strategy was basically one of nuclear checkmate, commonly referred to as “Mutual Assured Destruction” or “MAD.”  In a nutshell, if one side launched a nuke, the other side would retaliate with the full force of its nuclear arsenal, then the first side would simultaneously respond with its full complement.  In a matter of minutes, all 50,000 nuclear weapons would be released and both the United States and the Soviet Union—and their allies—would be annihilated.  As crazy as that seemed, it was the very threat of mutual assured destruction that kept the two enemies—and the world—at “peace.”  This perverse nuclear standoff was known as the Cold War.  The escalation of the nuclear arms race over the course of forty years had made a nuclear attack or accident ever more likely.
In the back of my mind were the voices of children I had come to know during the two years I taught history to eighth graders at the Maret School in Washington, D.C.  To them, the Cold War was not a unit in a history book, it was their milieu, shaping their lives and dimming their vision of the future.  Many of my students expressed dismay that grown-ups were doing nothing to ease the likelihood of a nuclear war; in fact, they observed, adults were playing a dangerous game that seemed destined to trigger a nuclear disaster.  I was at a loss for a reasonable response to their concerns; I felt compelled to defend the actions of adult society but found I could not.
Coming from a politically active family, I was predisposed to believe that I should use my abilities to serve humanity and bring about positive change in the world.  What skills could I bring to a cross-country peace march?  I had a few years’ professional experience as a schoolteacher that might come in handy if there were families with children on the march; I had learned to sing and play guitar; and I was pretty sure I could walk from Los Angeles to Washington, D.C.  That would be the easy part.  What other abilities I might need or whether I possessed them, I had no clue.  I would have to wing the rest.
David Mixner’s “remarkable dream” inspired me to get involved in an effort to change a Cold War ideology that had already claimed a second generation of followers.  Though I made the decision in one brief moment, it felt completely natural that I should join the Great Peace March.  In fact, a walk across the United States seemed like a perfectly rational response to an entirely irrational state of affairs.
Ultimately, about five hundred people walked across the United States on the Great Peace March for Global Nuclear Disarmament.  No one took a census.  People came and left and came back again.  Some walked every step of the way.  Some traveled along with us though they couldn’t manage the walking.  One took her very first steps on the journey.  Another took some of her last.  Everyone who was there, whether for a few days or for the full eight-and-a-half months has a unique story, and the stories all fit together in a crazy quilt of the amazing Great Peace March experience.  If you were to meet a dozen peace marchers and listen to their tales, you’d hear twelve individual sagas.  You might even hear disagreement about how the exact same event went down, but you’d also start to see the common threads that over time wove us into a unique community.  No one marcher could ever tell the whole story, but here is mine… 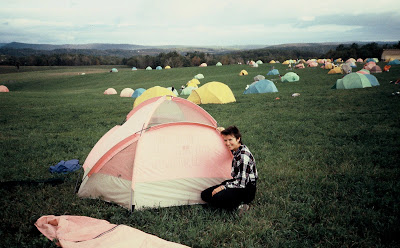 Email ThisBlogThis!Share to TwitterShare to FacebookShare to Pinterest
Next Chapter Table of Contents